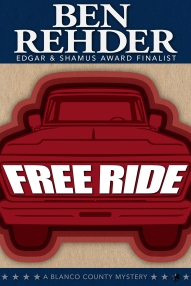 Now that we have that out of the way…

Ben wanted to become a writer ever since he was dropped on his head as a toddler. As he grew into a young adult and the vertigo dissipated, his passion for literature grew. Ben longed to craft the type of soul-stirring prose that would touch people’s lives and help them explore new emotional horizons. But he went to work at an ad agency instead.

Throughout his rewarding and fruitful career in the ad business, Ben has been known to write such imaginative and compelling phrases as “Act now!,” “Limited-time offer,” and “Compatible with today’s rapidly changing network environment.”

However, there eventually came a time when, as unbelievable as it sounds, writing brochures and spec sheets simply wasn’t enough to satisfy Ben’s creative urges. Ben knew: It was time to write a novel.

“But what kind of novel?” Ben asked himself, drawing stares from passersby.

A mystery? A thriller? A work of suspense? Ben had read hundreds of books in these genres and loved them all. But nothing had sparked his creative juices enough to try it himself.

Fate played a hand one day when Ben’s father-in-law tossed him a copy of a Carl Hiaasen novel. And then it hit him. It literally hit him, right in the forehead. When the swelling went down and Ben had a chance to read the book, he discovered a type of fiction he had never experienced before—the comic crime novel! He loved the wacky characters, the zany plots, the interesting writing that threw a good deal of humor into the mix.

So Ben set out to write his own novel. After many grueling minutes in front of a computer, Ben was proud to present Buck Fever. Like many best-selling classics, Buck Fever has lots and lots of verbs, prepositions, adjectives, and the occasional gerund. It was even nominated for the Edgar Award for Best First Novel!

Since then, Ben has written 20 more novels, and some of them make sense.